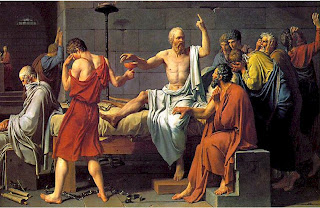 In our discussion of the Apology we have become familiar with Socrates' view of the good life. We have seen that he was willing to give his life for his beliefs--one must be virtuous and live an examined life to be good. Socrates feared the possibility of acting without virtue more than he feared death. But, we might ask, what does it mean to be virtuous and how do we know if we are virtuous? For example, how do we define a virtue such as "justice"? What, exactly, is "bravery"?

This week we will turn to Plato's Republic. Like the Apology, this work also features Socrates as he engages in discussion with friends and fellow Athenians (who are sometimes not so friendly to Socrates!). The Republic outlines the creation of Plato's ideal state, a republic ruled by philosopher kings. Among the many topics discussed in this work, the virtues are again taken up and examined. We will focus on some of the passages considering the virtue of justice and what it means to be just.


In preparation for this discussion it will be helpful to do some thinking about justice. Where and in regard to what do you hear the term "justice" used in our society? What does it mean for something or someone to be "just" or act with "justice"? As usual, considered thought is all that is required here. Perhaps if we make some initial attempts at an answer we can get closer to the truth about justice as a class.
Posted by Michael at 5:27 AM